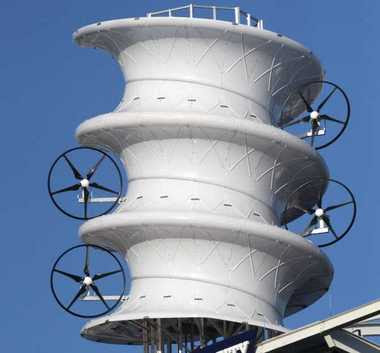 Thomas Ondrey, The Plain DealerThe spiral wind turbine system perched above the southeast corner of Progressive Field is performing better than expected and also attracts attention from fans, especially when it is lit at night.


The wind turbines attached to that distinctive plastic corkscrew atop Progressive Field are overachievers.

The four mounted turbines are generating more than 4.5 times as much energy than if the turbines were standing alone, according to data collected by Cleveland State University.

"In terms of the fluid mechanics aspects of the device, it is doing exactly what we predicted," said Majid Rashidi, the chairman of CSU's department of engineering technology who developed the system. "Usually theory and practice don't match."

A 3,000-pound aluminum frame, covered with white plastic pieces to form a helix, was mounted atop the ballpark's southeast corner, near East Ninth Street and Carnegie Avenue, on March 28. Four turbines, each seven feet across, with five blades in each disc, are attached to the sides of the spiral, which rises 40 feet above the upper concourse.

Rashidi's theory was that the structure would deflect wind into the turbine, creating more energy. CSU received a $1.1 million grant from the U.S. Department of Energy in 2008 to design and install two structures based on Rashidi's patented system.

It involves a wind-deflecting structure with small-scale turbines able to generate power at low wind speeds.

In May 2009, CSU hoisted its first system, which weighed 10 tons, to the rooftop of its Plant Services Building on East 25th Street. Four turbines are affixed to the side of what looks like an old water tower.

Rashidi revised his concept, including reconfiguring the cylinder to look like an ice cream cone with a twist.

The Cleveland Indians agreed to host the new turbine as part of its commitment to sustainability, including adding solar panels to the stadium. The turbine is lighted within by colored LED lights.

In a quarterly technical performance report submitted to the U.S. Department of Energy on July 30, Rashidi reported that at a wind speed of 11 miles per hour the tower's four turbines generated 1,288 watts of energy, compared to a combined 200 watts of energy that would be generated by four stand-alone turbines, as calculated by turbine manufacturer.

A wind speed of 18 miles per hour generated 6,143 watts of energy from CSU's tower structure, compared to 1,412 from four stand-alone turbines. The report said the results, from April 1 through June 30, show the average electrical power generated by the spiral turbine was 4.64 times as much as conventional turbines.

"That is what the spiral does to the wind," Rashidi said. "It funnels more air."

The turbine is expected to generate about 40,000 kilowatt-hours per year, roughly the amount of energy needed to power four homes, Indians officials said. The ballpark uses about 17 million kilowatt-hours a year.

Rashidi plans to test the turbine for a year.

He said he has spoken with a company interested in replicating his turbine on a much smaller scale – a six-foot spiral and 18-inch turbines. It would be mounted on top of telecommunications towers like a weathervane, removing the need for electrical components.

"It would generate electricity for the tower in case of emergency when the power goes out," Rashidi said.
Posted by Samuel Wee at 11:08 PM